Merry Mithras to You All! 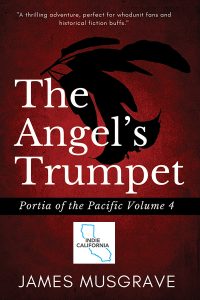 Interesting historical details about December 25, the date chosen by Christians to be the birth of their savior. I used another December 25 god, Mithras, which was a competing god during the first century, and it was pagan in nature with supernatural elements.
My dear wife, Ellen, who taught Bible as Literature for many years when she was alive, taught me and her New Testament classes about this rival to Christianity. So, good student that I am, I used this interesting fact in my fourth historical mystery, “The Angel’s Trumpet.” Here’s the passage that explains the relationship between Mithras and Christianity in an important part of my novel’s plot:
Dr. McFarland smiled.
“This statue of the lion-headed and snake-encircled man was found inside a Mithraeum, which was the place where Roman male members of this cult performed ritual initiation rites during the first through fourth centuries. The main feast was held on December 25th, the same day as our Christmas. Mithra was a god invented by ancient Persians and Indian Aryans, who were in competition with the Christian Jesus. These pagan worshipers of Mithras, a sun god, were eventually slaughtered out of existence by the rival Christians. The Jesus story was also about a sun god, complete with the nature symbols in the Garden of Gethsemane, at the Last Supper, and during the sacrifice on Golgotha. In fact, it’s quite similar to the way we rationalize the massacre and captivity of the Native followers of so-called pagan religions in this country.”
She decided to intercede with the connection to the present case.
“In typical male aggrandizement, Mithras was born from a rock, and his name is derived from the Persian and Sanskrit ‘mitra,’ meaning a contract, agreement or covenant. These male members greeted each other with a secret handshake, for which we today recognize in legal terms as the gentleman’s way of concluding an agreed-upon negotiation or treaty.”
Laura scowled.
“Quite misogynist, as usual.”
Dr. McFarland laughed.
“Indeed. These places of worship were easily created for most any location or human activity. During battles, inside a fortress or city, or even beneath the churches and temples of other religions. All that was required was a room with a table for dining and an altar where the sacrifice of a bull could be replicated, literally or symbolically, by the highest leader in the cult, called a Pater, or father.”
She noted that the mention of a sacrificial element caught Isaiah’s attention.
“Hercules could kill the lion, and Mithras could kill the bull. What was their goal in performing these acts?”
“Captain, good question. I shall ask you a question. What is the goal of the Christian Mass?”
“To remember the sacrifice that Jesus made to redeem mankind of its sins?”
“Allegedly. And since Mithras was a competing religion to early Christianity, it also had the goal of redemption for those who participated in the secret mysteries. Unlike Christianity, however, there was no central hierarchy of sages or religious texts created. Only the ritual of the slaying of the bull, accompanied by a feast and the iconography to represent the other, more natural symbolism of redemption and purification. There were also different levels or grades of membership.”
“Purification?” Detective Abercrombie smirked. “On my daddy’s farm, there was nothing pure happening when we slaughtered a bull for meat. Just a whole lot of blood.”
“Again, like Jesus, Mithras was a sun god. However, unlike the Christian myth, in which Jesus must be sacrificed to free the spirit of man into eternal life, Mithras sacrifices a bull, which is then eaten together with the sun god in a pagan feast. In the iconography, a woman, represented by the moon, is also included. There were probably women used during their feasts, one would imagine, for one purpose or another.”
That’s it! My novel was that much better (and more mysterious) because of my wife, from the grave, and my own bit of research.