The Rich Get Rich … 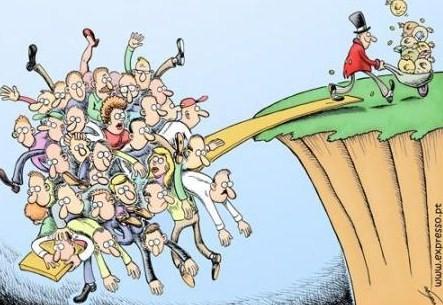 Elon Musk (asshole because he left with his gigantic corporations to flee to Texas) recently said that “Nobody needs college. You can get it all online, and it’s all free.” This statement is relatively true, but, at its root, it’s very, very false. For example, even though California may lose many thousands of jobs because Musk moves minions to Texas (he already has Tesla in Arizona and everywhere else but California), this is not the problem. It’s the fact that by law corporations the size of Musk’s don’t pay enough taxes to help the poor students, who are being assisted a “wee bit” from the donations of people like Bozo Bezos’ ex-wife, MacKenzie Scott.
Perhaps this may be true for self-motivated, visual and auditory learners, who don’t need the camaraderie and help of teachers, and who don’t want to pay the exorbitant fees that Ivy League schools charge just so the rich can “network.” The following may be true, and it is a generous overture by Ms. Scott to make, but if you dig a bit deeper into the story, the facts are obscured just the way Musk’s statement is obscured, by the reality of our meritocracy-driven economy today.
The least for those who need it most.
Alcorn State University, Santa Fe College and West Kentucky Community and Technical College are all working-class colleges. Most of their students are lower-income, and many are trying to become the first member of their family to earn a college degree.
If you spend time on any of these campuses, you are likely to come away feeling inspired. The students have often endured hardship — like a dysfunctional high school, an abusive relationship or wartime military service — and figured out how to keep going.
You may also notice something else: The colleges trying to educate these students are doing so on a shoestring budget.
West Kentucky spends $7,200 annually per student on education — money that needs to cover the salaries of professors and support staff, as well as labs and other educational resources. Alcorn State (in Mississippi) and Santa Fe (in Florida) each spend less than $14,000. So does Borough of Manhattan Community College, in New York.
Want to guess how much money Ivy League colleges spend on education per student each year? About $100,000 on average, according to a report by Third Way. Elite public universities often spend more than $30,000.
These funding gaps exacerbate both economic and racial inequality. “The dollars don’t go to the people who truly need it,” Jeff Strohl, of Georgetown University’s Center on Education and the Workforce, told me. Without enough resources, working-class colleges tend to have low graduation rates. Many of their students struggle to find good-paying jobs and to repay their college loans.
As inspiring as the students at a place like Alcorn State may be, they can’t overcome every obstacle put in their path.
This week, the philanthropist MacKenzie Scott — who helped shape Amazon, during the years she was married to Jeff Bezos — announced that she had given away more than $4 billion, mostly to organizations focused on economic hardship. “This pandemic has been a wrecking ball in the lives of Americans already struggling,” Scott wrote on Medium.
Scott’s 384 recipients included 36 colleges, all with large numbers of lower-income students. The four colleges I mentioned above are on the list. In some cases, the gifts are the largest that the colleges have received.
“I was stunned,” Ruth Simmons, the president of Prairie View A&M, a historically Black university in Texas, told my colleague Anemona Hartocollis. When Simmons heard in a phone call that the gift would be $50 million, she wasn’t sure she had heard correctly. The caller had to clarify: “five-zero.”
Higher education experts are praising Scott for giving money to the colleges that need it the most, rather than to colleges that already have the most. Strohl called her choice of recipients “brilliant.”
But the experts are also careful to add another point: Scott’s gifts are not nearly large enough to erase the annual funding gaps created by the government. Her donations will make a difference in part because the problem they’re trying to address is so severe. The country’s higher education system often hampers upward mobility.
So, even though MacKenzie Scott’s endowments to these small and struggling institutions are not anything to sneeze at, if you look beneath the surface, you can see that she is dumping a lot of the tax burden on these schools, as the fact remains that the poorer schools have to pay an “endowment tax,” whereas the big private schools pay much less, as described in this article. Whereas, Elon Musk, and her ex-husband, and their corporations, can slide through life without paying to the Fed and States to help these struggling schools and people who need BOTH the money and the networking (which they mostly never get because they were born in the “wrong families.”) Perhaps you still believe in the Horatio Alger, Depression Era myth, which has today morphed into the Republican (bootstraps story), and the Democrat (earn by achievement and merit story), but I do not. I believe in the “comedian” George Carlin myth, “These rich fucks in Congress, whose giant corporations and institutions own us, will never give it back. They own us.”