Portia of the Pacific Mysteries

Best-Selling and Award-Winning Portia of the Pacific

30-minute video explains how I create my best-selling and award-winning plots. 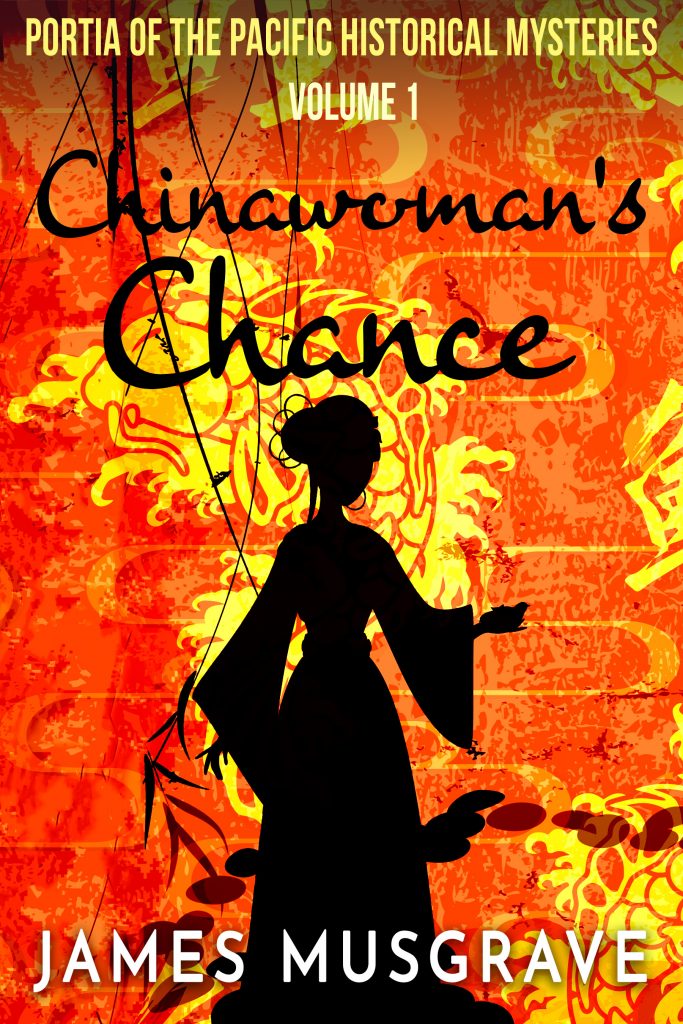 “Those who cannot remember the past are condemned to repeat it.”
–George Santayana

“Musgrave has used his own readers and placed them as suspects and characters in The Stockton Insane Asylum Murder and The Dancing Murders.”

Choose from any of these locations to get the paperback book you want:

Celebrating the Launch of The Dancing Murders

Get a Free Enhanced Copy (.epub3) of the First Mystery in the Series!

All Six Mysteries about Pacific Mysteries for Your Reading Pleasure

“A gruesome murder makes way for an unexpected romance in James Musgrave’s Chinawoman’s Chance.  The first book in the Portia of the Pacific series, Chinawoman’s Chance starts the series well, utilizing historical figures as principal characters while shining a light on a sordid aspect of US history. The story is set in San Francisco two years after the 1882 Chinese Exclusion Act, and is fronted by Isaiah Lees, the first hired policeman of the San Francisco Police Department, and Clara Shortridge Foltz, the first woman on the West Coast to serve as a public defender.”  Anita Lock, Foreword Clarion Reviews

“James Musgrave’s The Angel’s Trumpet is one of those rare historical mysteries that is both entirely plausible and yet truly original. A richly researched adventure into the complex social web of Gilded Age Washington, featuring deeply-realized and re-imagined luminaries including actress Sarah Bernhardt and President and Mrs. Cleveland, the novel is also surprisingly modern in its sensibilities, a compelling romp into an earlier era’s struggle with addiction and vice and secrecy and race relations, and, most of all, hidden sources of power. You will read this book in one sitting–and you will be very glad that you did. A meticulously-plotted gem from a master of the genre.” Jacob M. Appel, author of the Dundee International Book Award winner, The Man Who Wouldn’t Stand Up.

“In Musgrave’s promising historical and series launch, fear of job losses leads to the passage of the Chinese Exclusion Act of 1882, the first major law restricting immigration to the U.S. Two years after the law takes effect, tensions between San Francisco’s white and Chinese-American populations heat up after the murder of Mary McCarthy, a 19-year-old prostitute, whose killer flayed her corpse, leaving only skeletal remains behind. The authorities focus on the Tongs, arresting 14 of their leaders on suspicion of some involvement in the atrocity. Reporter George Kwong, the son of one of his community’s wealthiest members, is later charged with the killing. The only people standing between George and execution are two real-life historical figures: Capt. Isaiah Lees, of the SFPD, and Clara Foltz, a pioneering female attorney who successfully advocated for women to be allowed to practice law in California. Several clever plot twists guide Isaiah and Clara to the real killer. Readers will look forward to their next adventure.” (BookLife)

Kirkus Review: “An entertaining mix of fact, fiction, feminism, and the occult.”

“Clara was one of only two women practising law in San Francisco, and as such she had a lot to prove, but she also had good instincts. Instincts that saw her befriend Adeline, a young woman she found in distress. When finally she returned to her senses, Adeline confesses to witnessing a murder, in fact, of the witnesses called she was the only who witnessed it happen, and yet she was refused the right to testify; why? Because she not only witnessed the murder, she heard the thoughts of the one committing it. The killer was set free, and Clara is determined to use Adeline and her perfect recall – along with her ability to channel other people’s thoughts and memories – to get to the bottom of what happened. But how can you prove something when your evidence is only the word of someone who could be called crazy? You search for evidence, of course, but Clara must be careful. The killer believes he can control anyone, but why commit these acts in the first place. Is it to show their power, or is there something else afoot? Written in a style suitable for the era, James Musgrave’s The Spiritualist Murders: Portia of the Pacific Historical Mysteries Book 2 delivers an intense and vivid scene of San Francisco in the 1880s. While I can’t speak for historical accuracy due to unfamiliarity, the feel of the work is very authentic to the time. Musgrave writes an enjoyable narrative that will appeal to a mature audience, as well as those who enjoy a well-worded and conceived plot. As a murder mystery, you are of course asking yourself the how and why, and the spiritual twists give this book a little something extra. Controversy, challenges, sexism, manipulation, and agendas – both concealed and visible – drive the mysteries and the characters forward in a novel that is bound to please lovers of the genre who are looking for something just a little bit different.”

See what “enhanced eBooks can do” with this free copy of the first mystery in the Portia of the Pacific series! Register inside the secure Embellisher eReader for free with your email and password. Then, click on the Chinawoman’s Chance book cover in your library interface. The price will be $4.95. However, use the coupon code: 0421 at checkout, and it will load in your reader for free!

1. As a woman of Chinese ancestry who lived in San Francisco and Northern California, did you enjoy narrating a history about the early Chinatown of San Francisco?  Why?

2. Do you think it’s important for historical fiction to feature issues that may be controversial, such as the Chinese Exclusion Act?  Why is this important?

3. Why do you think the character of Clara Shortridge Foltz will be an excellent vehicle for this series?

Enhanced eBooks (.epub3) mean you get the audiobook recording, a SoundCloud Playlist of relevant (and optional) music, as well as historical videos and other information to enhance your reading and educational experience. (Please note: The trademarked Embellisher eReader must be used to view all .epub3 books sold here because of exclusive software features not available in other eReaders.)

Listen to author read a chapter from The Dancing Murders: 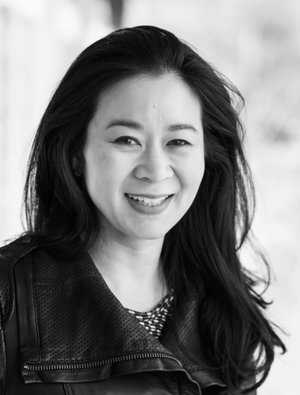 Author James Musgrave has brought his Portia of the Pacific investigations down to San Diego, in The Dancing Murders, which will be the first interactive, “choose the suspect” ePub3 (multimedia) mystery ever created for his readers’ enjoyment. As part of the fun in this tribute to Attorney and Detective Clara Shortridge Foltz (based on the real woman, who was the first female attorney appointed to the California Bar and the founder of the Public Defender’s Office), two women and one man have been chosen to be portrayed as fictional characters.

Prospective fans of the series may see the first five chapters of The Dancing Murders, in draft format, by registering for free in the secure Embellisher eReader platform here. After logging in, just click on the free eBook, Stingaree, which appears on the eReader’s Library desktop.

In addition, new fans of the series can get a free copy of the enhanced (ePub3) digital version of the first mystery, Chinawoman’s Chance available online inside the Embellisher (TM) ePub3 eReader (see above offer).

With historical videos and graphics, as well as a full reading of the mystery by Chinese-American, Anne James, Chinawoman’s Chance is an entertaining experience.

The second enhanced version is The Spiritualist Murders, with the audiobook version included and read by the author. This book is also available for purchase as an online enhanced book to read right now.

Buyers of The Dancing Murders enhanced version, will get emailed a coupon for 1/2 off the seventh mystery in the series. 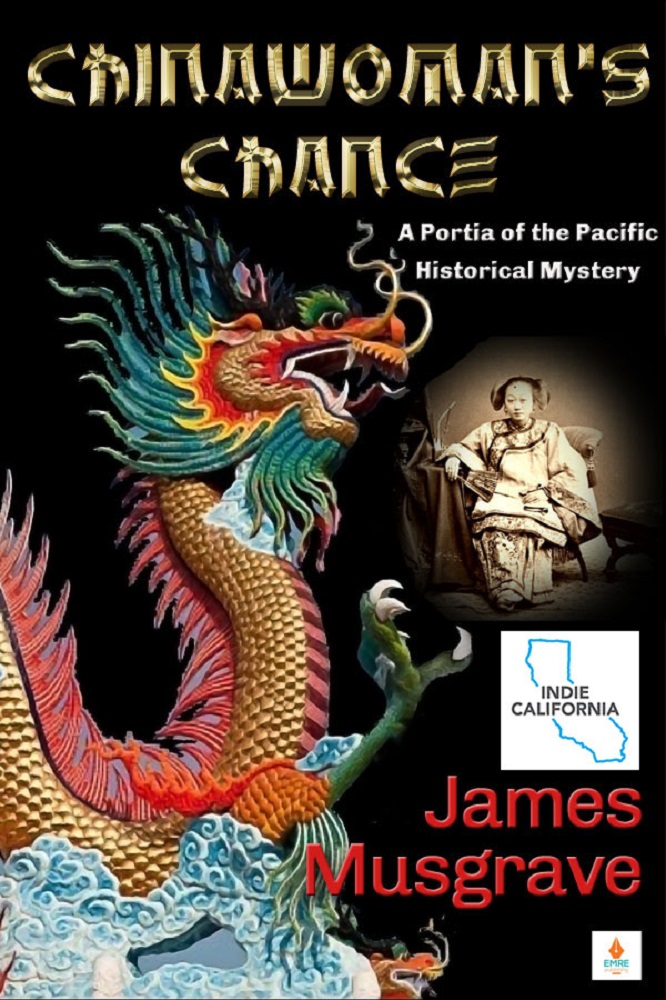 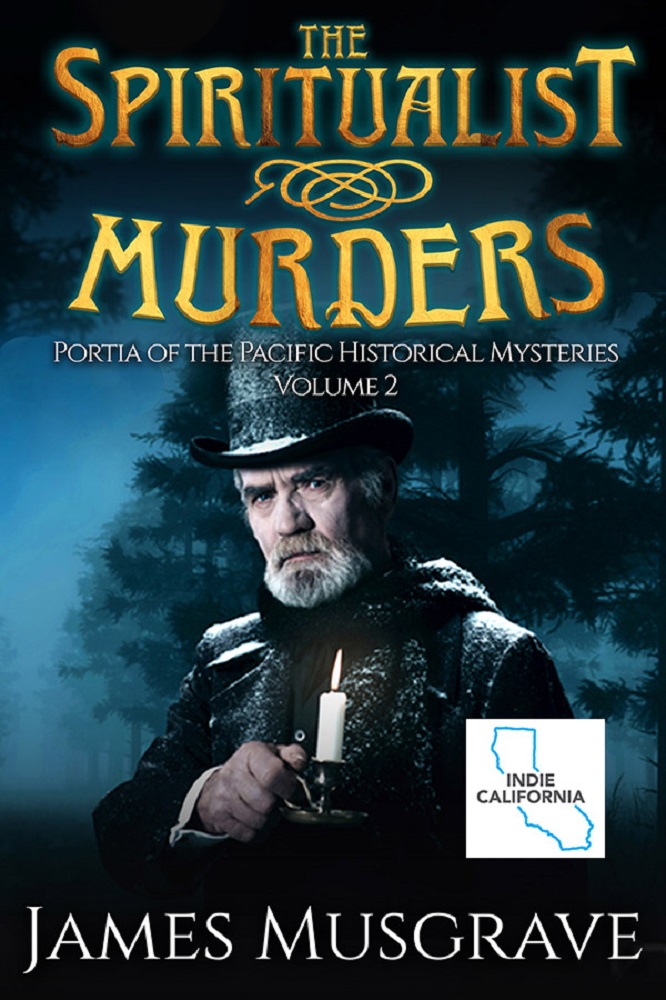 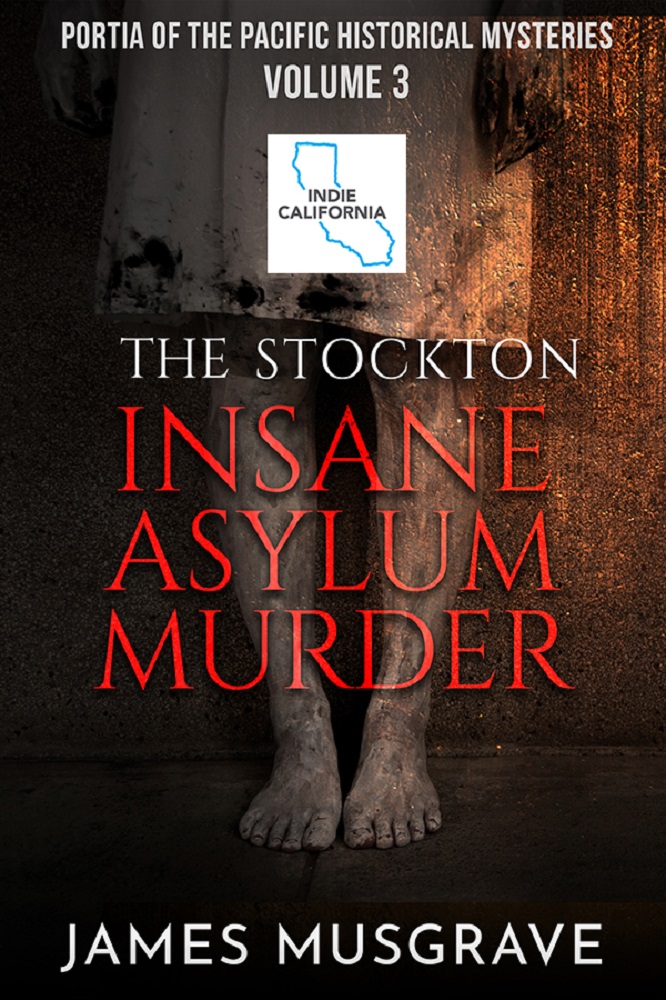 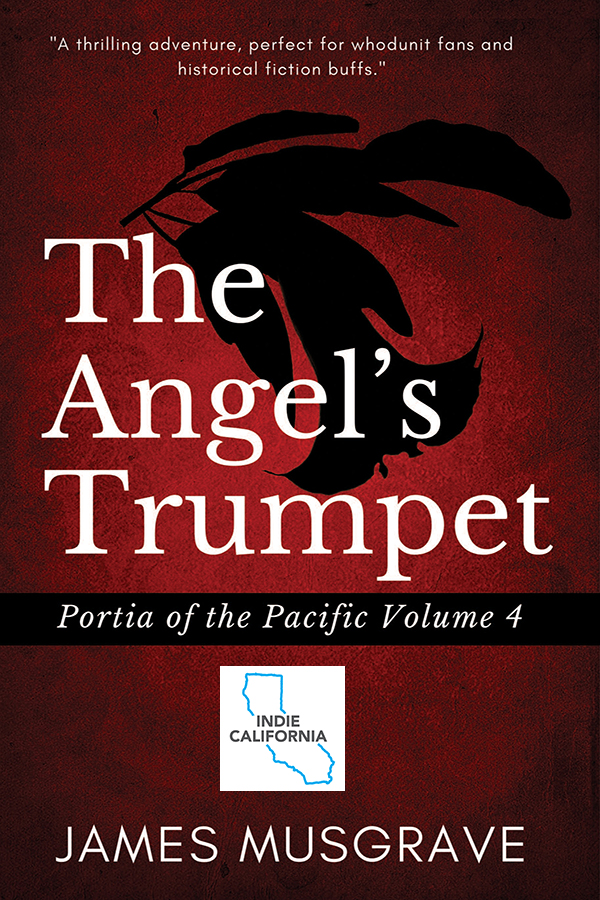 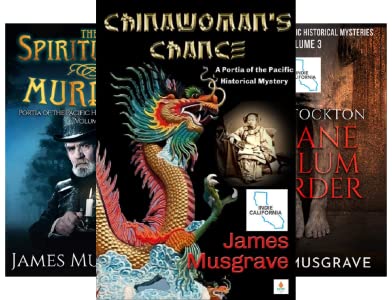 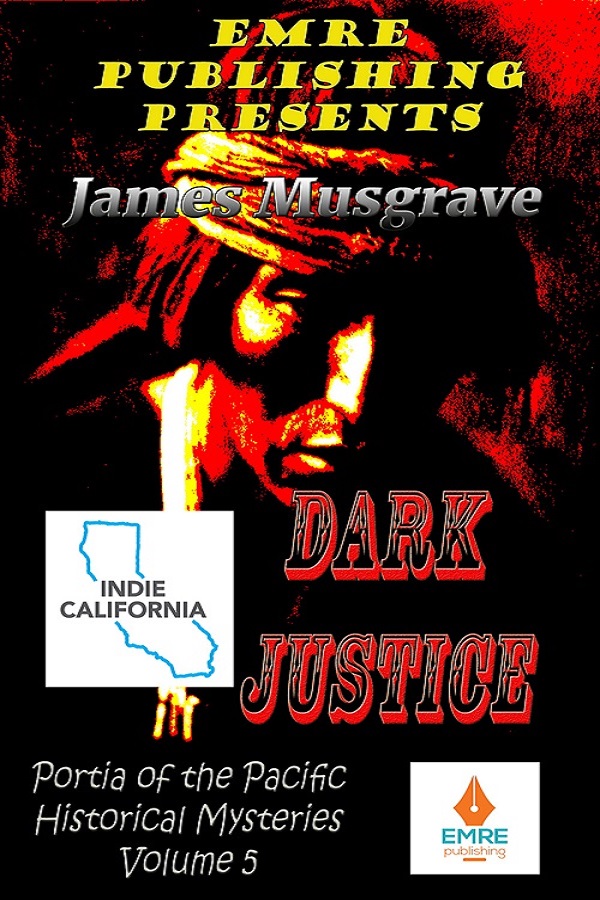 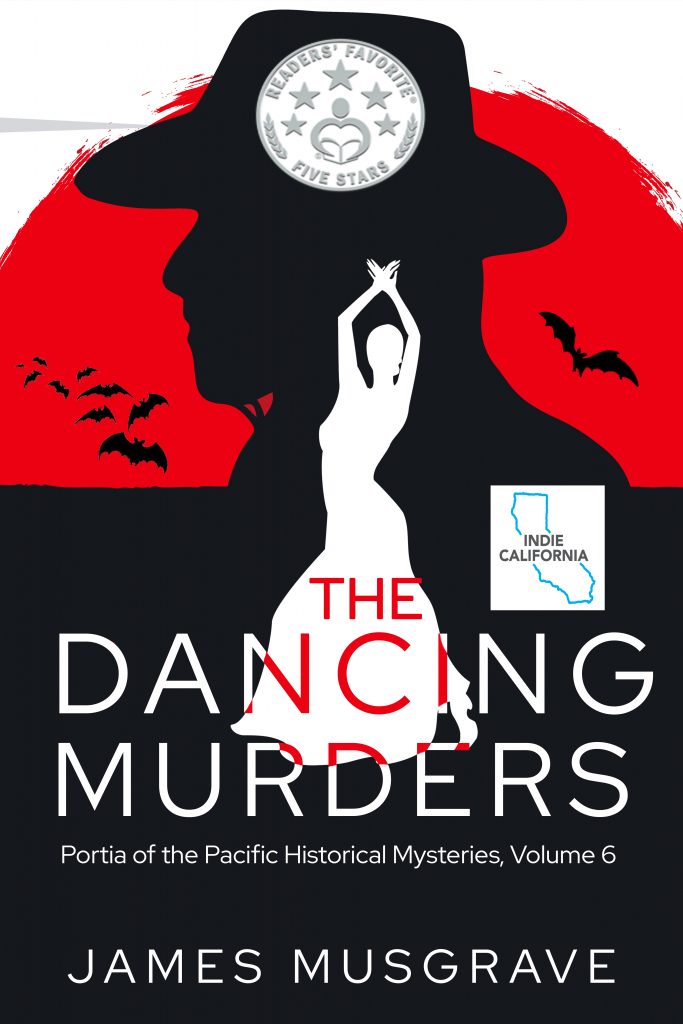 Catch-up on this series by buying the Amazon Paperback, Digital and Series Versions. Click on the Cover

All six of these mysteries were vetted and selected to be in the California Independent Author Project, as were the four mysteries in the popular Detective Patrick James O’Malley series set in the 1860s of New York City (Forevermore, Disappearance at Mount Sinai, Jane the Grabber, and Steam City Pirates).

To order all five of the first mysteries in the series, pay less in digital price, and order directly from the author (click): Chinawoman’s Chance (free), The Spiritualist Murders, The Stockton Insane Asylum Murder, The Angel’s Trumpet, and Dark Justice. Pay with Paypal and receive your eBooks by eMail attachments. Also, you’ll get a “bonus book” download of the first mystery in the Pat O’Malley Mysteries, the First Place Award-Winning Historical Mystery, Forevermore, about the fictional murder of Edgar Allan Poe in 1849.

All visitors may read the digital copies through a public library in California at Biblioboard.

The Dancing Murders audiobook is being created! Listen to narrator Joan DuKore as she speaks the introduction. Madam of the Canary Cottage, Ida Bailey.

To get $2.00 off, order your digital copy direct from the publisher. (Paypal payments only)

Get your purchased eBook “authorgraphed” by the author, James Musgrave, with a special dedication.

“The Dancing Murders is a trove of secrets, but author James Musgrave’s own secret is his gift for capturing the psyches of larger than life historical figures including gunslinger Wyatt Earp and his Jewish common-law wife, notorious madam Ida Bailey, and pioneering female attorney Clara Shortridge Foltz. From the heights of Jewish mysticism to the seedy underbelly of nineteenth century San Diego, The Dancing Murders is California’s answer to Rashomon and As I Lay Dying. In Musgrave’s nimble hands, the death of Rabbi Sonenschein becomes a window into the life of a West Coast as fascinating as it is forgotten.”—Jacob M. Appel, author of Einstein’s Beach House.

Choose the suspect inside the mystery. Three brothel Madams and one Gunslinger.

Josephine Marcus Earp, Suspect #1. How much money is she profiting from investments in bordellos of the Stingaree district of San Diego?

Ida Bailey, Suspect #2. She is a drug addict and madam of the richest whore house in town, the Canary Cottage.
Heaven Riendeau, Suspect #3. Recently given a loan by Mrs. Earp to establish her own, rather unique bordello, Golden Faun, next-door to the Canary Cottage.
Wyatt Earp, Suspect #4. Initially charged with the murder of Rabbi Jerome Sonenschein at the Hudred-Round Fight in Tijuana, Mexico on May 6, 1888.

James Musgrave was born in Fall River, Massachusetts. He taught as a Professor of English and worked as a Supervisor, Management Development at Caltech, Pasadena and at various San Diego colleges. He is now the author, publisher, and Digital Marketing Consultant at EMRE Publishing, LLC in San Diego. He has won many writing awards, and his mysteries are “featured selections” by the American Library Association. He was also a Finalist in the Bram Stoker Awards, Won the First Place Award for Best Historical Mystery in the Chanticleer International Book Awards, and he was a Finalist in the Heekin Fellowship.

Click on James Musgrave’s photo to go the his Amazon Author page.